Nathan recently graduated from Durham University, achieving First Class Honours in Music (Bachelor of Arts). Following on from studies as a repetiteur, under David Cookson, he has been working as a conductor for the last couple of years. He began conducting studies in his second year at Durham University and was awarded a mark of 80, achieving the highest mark in his year.

In March 2020 Nathan musically directed Mendelssohn's dramatic oratorio 'Elijah', in Durham Cathedral, a collaboration between Durham University Choral society and Durham Opera Ensemble. The evening was a huge success, with the Palatinate Newspaper stating, 'Conductor Nathan Smith cut an animated figure throughout the concert, directing both orchestra and choir with the necessary vigour and precision...Nathan Smith deserves full praise for rising to the challenge of this lengthy and complex oratorio and bringing together such a range of people to realise it.' Additionally, the evening won numerous awards:

Aside from this, Nathan's passion is rejuvenating the great choral works of the Victorian Era, focussing on Arthur Sullivan, Hubert Parry and Charles Stanford. Nathan is also interested in the operettas written by Gilbert and Sullivan, a passion drawn from his studies as a répétiteur with Peak Opera, Preston G and S, and St. Leonards G and S. In 2019, Nathan led a performance of 'Iolanthe' at the International Gilbert and Sullivan Festival, Harrogate, competing in their Unifest competition. This competition saw Durham Opera Ensemble awarded second place and Nathan the title of 'Best Musical Director, 26th International Gilbert and Sullivan Festival'. 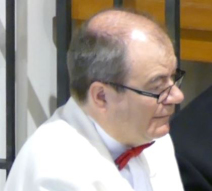 We are privileged to have Paul as our regular accompanist. Paul was born in Lancashire. A BMus degree from Cardiff University was followed by two post-graduate years at the Royal Welsh College of Music and Drama, studying piano with Martin Jones and Geoffrey Buckley and more recently with Martin Roscoe.

Paul appears frequently as recitalist, concerto soloist and accompanist at venues throughout the North West. He is Principal of the Blackburn School of Music and teaches piano at Stonyhurst College in the Ribble Valley.

ln addition to being the pianist for Preston Orpheus Choir, he also appears regularly as accompanist and soloist with Burnley Municipal Choir.

Paul is active as a sought after accompanist, and recent exam successes include Dip ABRSM in clarinet and ATCL in singing and cello. As a teacher, Paul has had many students who have gone on to study music at college and joined the profession in various roles.